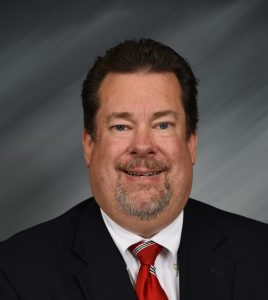 Mr. Thompson and his wife, Lori (Rockford native and East High School graduate), were married in 1991. Lori’s expertise in the medical field began as an R.N. at Rockford Memorial and continued as she obtained her M.S.N./N.P. degrees in 2005. She has served as an instructor at St. Anthony’s College of Nursing and the University of Illinois College of Medicine as well as a provider at child abuse programs in two states. After using her training as a forensic pediatric nurse practitioner in her role as Wisconsin’s state senior training officer and SANE program coordinator, she teaches specialized health science classes at Belvidere High School. The Thompsons have one son, Michael, and reside in Loves Park.

Mr. Thompson has been involved in musical and theatrical activities since high school, soloing and performing in choirs and quartets at the collegiate, church and semi-professional level – as well as performing in local community theater. He enjoys reading, anything musical and working outdoors – following his father’s path in carpentry and a love of working on the farm.